Turn on suggestions
Auto-suggest helps you quickly narrow down your search results by suggesting possible matches as you type.
Showing results for
Show  only  | Search instead for
Did you mean:

These files appear to be related to the OS attempting to check whether or not AppLocker is enabled, based on the contents of the .ps1 files seen thus far.

A screenshot of a sample rule is below...

As a general rule, if you are getting these blocks after recent Windows updates, you can look at the path and naming convention of the files you see in your environment, and adjust accordingly, however the two paths mentioned in the resolution, and this additional path here for older Windows versions should resolve the blocks for most customers.

Some articles related to these files:

Based on this, I've updated the solution to simply state *\powershell.exe, ensuring all paths are accounted for.

To keep the custom rule tight, you can add these two lines to PROCESS:

or can instead just add this one line to PROCESS which covers both:

As with csamet​ example above, it was App-V, launching powershell.exe, so by finding the New Unapproved File to computer event in the console, and exposing the command line, you can add the process/command line combination to the rule to approve those files created when App-V is the source. 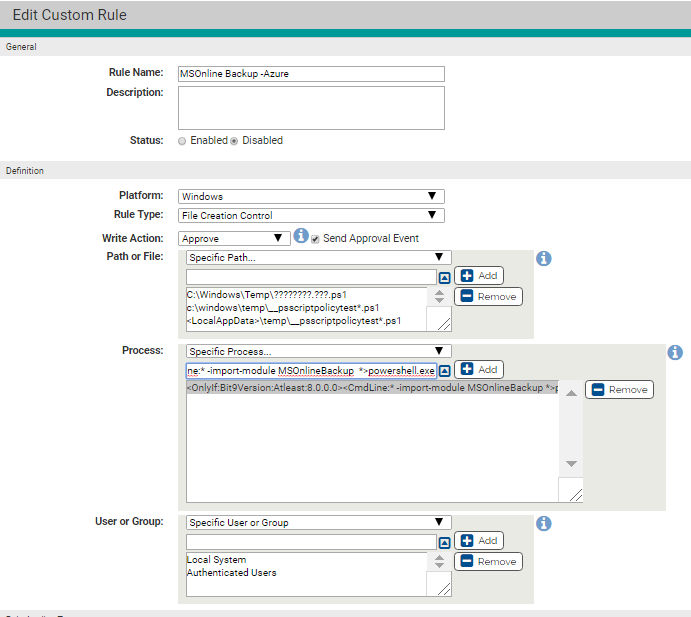 Thanks for this article!  As of this morning (May 18, 2018) we started getting inundated with powershell blocks - the 8.3.ps1 pattern.  We found that the triggering powershell script still actually runs, even though CBP seems to be blocking the temp version (which strips out all signatures of the original PS1 script).  This seems to be related to a specific windows update, as this just started happening after updates rolled out for us in the last few days, but I can't tell you which one specifically.  In our case, the scripts are all over the place (and therefore so are the actual powershell commands) - relating to various applications, deployments, login scripts, monitoring tools, etc.  So we have to unfortunately be pretty generic in our rule:  Allow any powershell.exe to execute any 8.3.ps1 pattern in c:\windows\temp for the system account.  Then a separate rule for the __psscriptpolicytest pattern, as these seem to execute as the logged in user.

In my tests, the source script actually still runs, even though CBP produces a block on the temp version. So I am going to experiment with silently blocking the temp version - I'd rather do that than approve on write or execute.

I could not determine is these had and business impact so I created an advance rule that silently blocked this behavior. 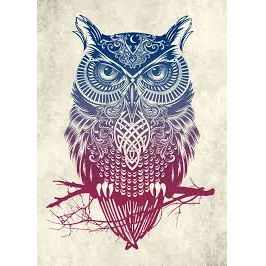 I'm a bit confused by this. I am indeed experiencing the limitless amount of __psscriptpolicytest, however mine aren't related to App-V. I made a PS script to quickly copy any PS1 write so I could read it and my PS script says the following:

That's the entire file. Because it uses a timestamp, the hashes are forever different. I've done an RSOP dump, and went through our GPOs, we DO NOT have anything related to AppLocker enabled.

I've gone the route of using a Silent Block on these but I'm still being flooded by blocks that get by. This is most likely due to a timing issue, the speed at which it's writing, executing it, and deleting it. I've had to make a similar adjustment to this with a FCC and EC as a backstop when ForeScout's CounterACT does this type of activity.

I just had another realization which is if I'm going the route of Silent Block, I don't need to care about file paths. If you're executing something that weird of ????????.???.ps1 you deserve to get blocked and if you're doing __psscriptpolicytest_z5kxut2f.zaj.ps1, no thank you either. 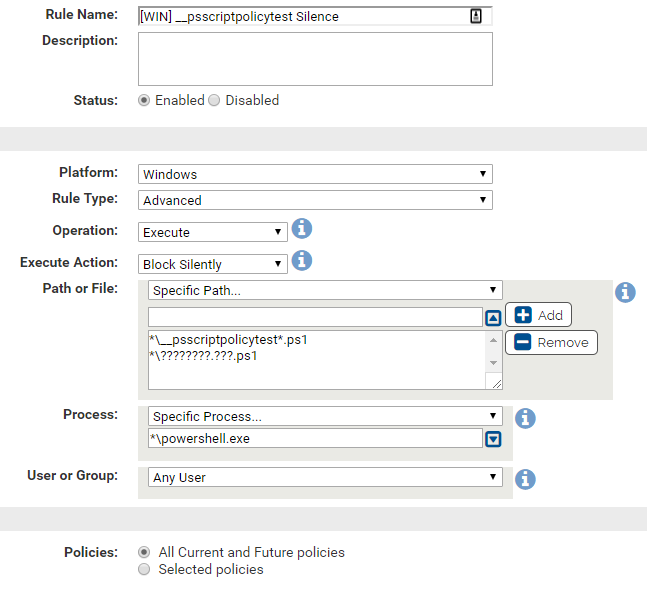 So I switched to no specific paths, hopefully it speeds up the blocking, I really don't want to switch to a FCC + EC and allow and put strain on for reason because of this random Microsoft change. Makes no sense in my environment, no GPOs related to AppLocker or anything....so WHY?? I've googled deep for this and nothing else we're doing to set PS in ConstrainedLanguage mode or anything either. Very odd.

Also as a side note for anyone reading, we've personally experienced no issues in our environment doing this.

//Update 6/15/18: after having this rule implemented for a while: it has definitely sped up blocking by like 100x, I haven't had a single __psscriptpolicytest missed block come through and zero negatives reported still.

This page explains some of what's going on:

Yes I had initially thought that as well, but in our environment, I'm blocking it as seen above and I still receive the following:

From my lab testing, it seems that blocking execution does not in fact restrict the language mode. However, blocking the creation of the file does. This may be a viable solution for those that either don't care about running in ConstrainedLanguage mode, are where that doesn't impact their script operation.

Please note in the screenshot below, I've added additional paths I've seen in testing, and note the <none> notifier to prevent user pop-ups. 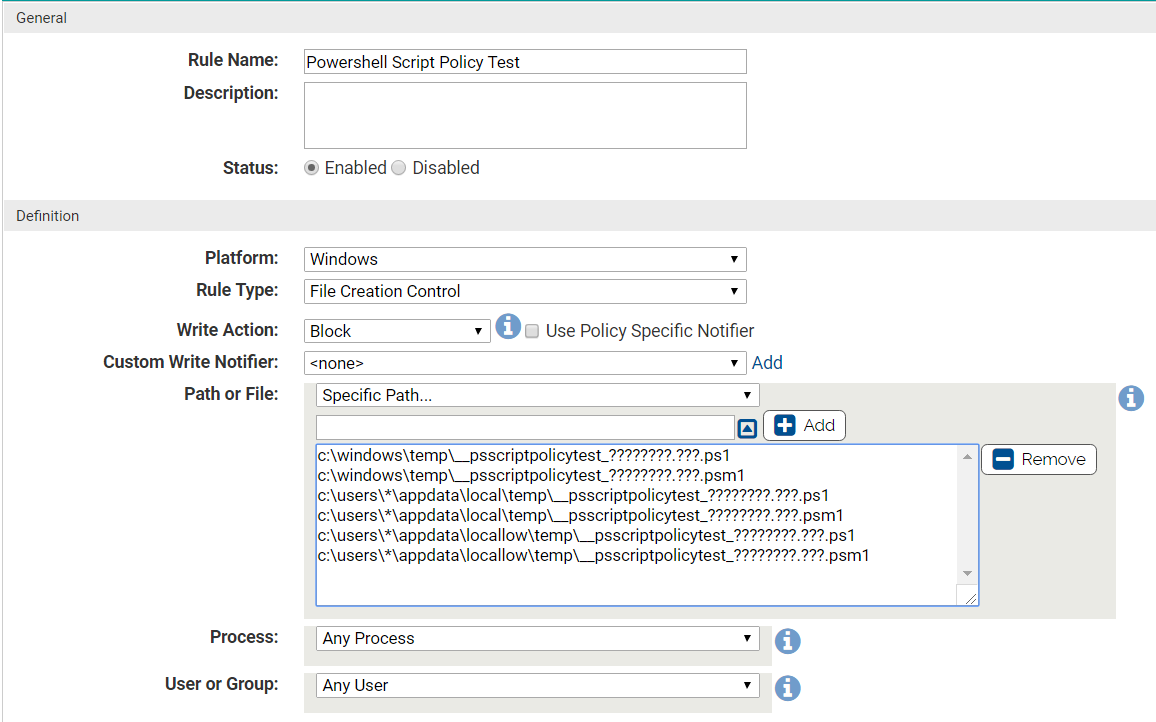 Cool, looks good. That was the next thing I was going to test, but got busy with other things. I'm going to study our environment and see if indeed I can actually make the full transition to ConstrainedLanguage mode because I definitely see it being beneficial overall anyways.

Are you saying that blocking the creation of the __psscript*.ps1 file will put all powershell scripts into Constrained Language Mode or just ones that App-V creates?

Independent of App-V. Stay tuned to this page, as we may have a better solution going forward.

Working on getting this solution marked as "outdated", but for those watching...  there is a new article up with a better long term solution here to handling these powershell files.   You can see the new solution here: